"If you light a lamp for someone else, it will also brighten your own path." - Buddha

This quote can perfectly describe how Rahul lead his life and what he strove to achieve every day. His positive attitude and friendly demeanor not only put a smile on your face but also made you want to conduct yourself in a better way. Rahul's life was about bringing happiness to others and making a significant impact on those he met. From a young age, he had always known he wanted to become a physician,like his father, so he could improve the lives of his patients. He spent many summers throughout high school and college in the hospital, volunteering and giving back to the South Florida community that he grew up in. Even after achieving his goal of going to medical school, he continued to help his peers and patients in any way that he could. His fellow students still comment on how Rahul would be the first student to make up study guides, lead student study groups, and stay up until the early hours of the morning helping his colleagues study for exams. Rahul also had the utmost respect for his patients and was fascinated with the medical knowledge that they provided him with. To Rahul, every day was an opportunity to light someone else's path. No matter if the deed was big or small, Rahul was selfless and always considered others before himself.

Rahul now lives in our memories. We feel we have a duty to emulate his life in order to fulfill the goals that he once set out to do. Each and every one of the members of this foundation has been personally touched by Rahul's good and we would like to pay that forward to the community at large. Rahul has taught us to become better people and we can only try to live our lives more in sync with what he showed us. Taking one step at a time in the right direction, hopefully, we can make Rahul proud of our actions and our impact on this world.

Light Ones Path is a foundation based on the life of Rahul Maheshwari. Our mission as a foundation is two-fold. First, Light Ones Path will offer scholarship and grant opportunities to underprivileged young adults who are studying to complete their education. Scholarship and grant applications will be available for adolescents and young adults throughout the United States. Second, our long-term goal is to facilitate the provision of compassionate, professional medical care to those who cannot afford it. To honor the memory of Rahul Maheshwari and his love for the local community where he grew up, we will create a free health clinic in the South Florida community.

The Light Ones Path Foundation was named after one of Rahul’s favorite Buddha quotes, which stated: “If you light a lamp for someone, it will also brighten your path.”
Rahul always wanted to light the paths of others. We want to make Rahul’s desire a reality.

Born on October 16, 1989 in Long Island, New York, Rahul attended high school at Pine Crest before receiving his Bachelor’s degree in biology from the University of Miami. To pursue a career in medicine, Rahul then went to the American University of Antigua in May 2013.

During his 25 years here, Rahul was loved for his positive attitude and vibrant personality. Whenever Rahul entered the room, he made his presence known with his larger-than-life persona and his unparalleled level of energy. But in addition to being the life of the party, Rahul was a loyal friend who showed a persistent willingness to help anybody and everybody in need. As Rahul was often dubbed “everybody’s friend,” we, at the Light Ones Path Foundation, want to be a friend to anybody in need in the South Florida community.

Rahul excelled at the various roles in his life, which included being a wonderful son, a loving friend, a diligent student, and a compassionate stranger. Rahul showed that even the smallest of actions, from smiling at a stranger to sharing his notes, could accumulate to form a lasting impact. It’s therefore no wonder Rahul managed to profoundly touch every community he was part of.

In his last years at medical school, Rahul became very serious about fulfilling his mission to become a doctor. He was highly ambitious and worked hard to become one of the most promising students in his class. Behind this work ethic was the simple motivation to make the world a better place.

"Personally, Rahul helped me improve my self-esteem and carry myself in a higher manner. I have always been hard on myself and others, but after having Rahul in my life, I have been a more positive, patient and tolerant person. I see myself and others in a better light and strive to see the positive before the negative in each situation that I face."

"The first time I met your son we connected instantaneously. I have to tell you that there aren't many people I know who match my energy level, but Rahul was DEFINITELY one of them. That's one of the characteristics we had in common. He had a palpable presence and everyone knew him. He was loud and fun and didn't have a sensor. I found him to be hilarious. I'm very similar in that sense and I just found it very welcoming that he was so similar and matched my energy so well.

When I started BSEP last year in May, Rahul sat me down for 2 hours in his apartment and told me everything I needed to know. He gave me notebooks and documents and questions and told me which professors I needed to get to know and gave me a weekly schedule of how often I should be talking to them. He gave me SO much advice. That was the first impression I had of AUA. Rahul...

I just couldn't believe someone would give up their time and energy to help a complete stranger. Honestly, I NEVER in my life met anyone like that. NEVER. And it's something that now I carry with me because it was a characteristic that I loved so much, I know that I now need to have it. That characteristic was passed along to everyone he helped. All the BSEP kids in my class and in last semester's class (like Brian, a mutual friend of Rahul and me). Brian and I and anyone else who Rahul touched seek out the new BSEP class and sit them down and tell them EVERYTHING they need to know, because that's something we all loved about Rahul and that we want to carry forward." 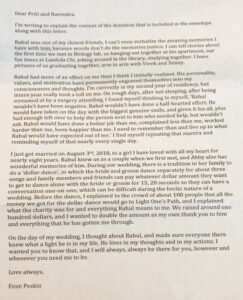